Patriot’s Day is the number one best day to be from Massachusetts. And wasn’t it just the bees knees that one of my very good friends decided to run it. And in the process introduce me to a whole bunch more runners. When I’d heard she’d be running, I knew I’d be out on the course, cowbell and signs in hand to cheer her on. If you’ve spent any time on this blog, my facebook page, or twitter you’ll know I post a lot. And I usually post pretty ridiculously silly things. Today started just like that. I was orange head to toe in support of the Liver Foundation, the charity my friends are running for, and I went about capturing the day just like I’d capture any other. That’s something a lot of people don’t know. To run Boston you can qualify by running another designated race in less than 3:05 (3:35 for women). Or you can join a charity team and raise money. The amount needed to be raised is usually between $3,000 and $6,000. People work the whole year to raise this money to run in the name of these great causes.
All winter we think “Why don’t we live someplace warmer” Driving into the city all I could thing was “this is why I live in Boston. Marathon Day is the best.” Who knew that I’d be proud to be from Boston for a whole different reason by the end of the day. I hate that this happened. But the response from runner’s finishing the race and running to donate blood, first responders running towards the danger seconds after the explosion, people setting up a google document to offer their couches and spare rooms, restaurants feeding stranded runners, all the way down to my friends giving me refuge when the closed T stranded me on the opposite side of the city from my car.
This is just so wrong. On my phone sit a handful of odd photos, a small glimpse into what was supposed to be an epic day. In my head are the jokes and puns I wrote, driving into the city, riding the T over to my spectating spot at mile 22, or relentlessly checking the BAA app for updates on my friends. I don’t know what to do with them now.
I was in place by 11 and watched the wheelchair division race by. Soon enough the elite women flew by, followed shortly by the elite men. And then the rest. If you’ve never experienced the Boston Marathon it’s really quite something. Runners just keep coming and coming and coming for hours. We were more than 4 hours into cow-belling and catcalls of “Yeah marathoners” and “Go Liver”.
Around 3 I received a strange text message. “Are you ok?” from a friend. I replied “???” thinking she had sent it to the wrong person. And then she filled me in. Quickly after that, texts and emails started pouring in asking the same question “are you ok?” My phone was dying, we didn’t know anything, and my friends were still running. So we kept cheering and I answered any texts that came in. Along with sending a text to my mom “I’m ok.” It was then that the first of my friends since the explosion was running by. We cheered for her and then I told her there were explosions. We still didn’t know it was a bomb. To be honest, I didn’t know if I should tell her or not. But I couldn’t bear the thought of her running into chaos, after running 23+ miles and not knowing anything. Shortly after that our next friend came by. We started to say hi and tell her what happened. She said she already knew, told us her mom was at the finish and then ran off yelling over her shoulder “I have to find my mom” clearly worried and focused on that singular task. Find her loved ones. It was then that it was really sinking in. Maybe it was time to stop cow-belling. And maybe put the signs away. The last of my friends came through shortly after. She was pretty sure her family was safe but wanted to go find the other friends that had just gone by. I gave her a huge hug and sent her on her way. And then the other two spectators that I was with and I didn’t know what to do. What do you do in that situation? Your beloved city is under attack. Close friends are frantically searching for family members. This glorious event has been marred. And we’re 3 miles from the finish watching police and ambulances go flying by. The race was stopping and they were holding runners so we thought we’d go catch up to our friends and see if we could help. But word finally came through that runners were being held all the way at Boston Common and we didn’t think it would be smart to add 3 more people to an already chaotic spot. By then we had more news from twitter and news websites and realized the T was probably closing, a fact I confirmed with the next police officer we passed. My fellow spectators offered to give me a ride to my car, but the marathon route was still closed and we couldn’t cross the city. I have friends that could take me in and eventually one of them was able to have dinner and drive me across the Marathon route to my car. All the while they’re making announcements not to congregate in large groups. As I was driving out of the city it was hard not to be a little nervous. And I just don’t understand how this can be real life. How this is the society that we live in.

20,000+ people have been working for months or years to train to be here. More than 20,000 volunteers were on the course at the very crack of dawn. Millions of dollars have been raised for truly noble causes. Fundraiser upon fundraiser has been organized, executed, and attended. I personally bid on a date to the Aquarium with a good looking guy (I don’t like the Aquarium, but he was cute. And it was in the name of liver research. Unfortunately he ended up getting a little too out of my price range, when the bidding dust settled). And now marathon hopes and dreams have been shattered, lives and limbs destroyed. And all in the name of what?

People are already asking why. And truthfully, I don’t think any reason could ever be given that would be enough to make me feel better about it. I don’t know who did this. And when he, she, or they are caught, I don’t ever care to know names. I don’t care to know faces. I just want them to face justice and see the full letter of the law brought down on them, feel the full weight of a city that may forgive, but will never forget.

I just want to hug the whole city. And punch something. And sit and cry. And I was 3 miles away. Though watching terrified runners go by will be something that sticks with me for a while. I can’t imagine what it was like at the finish line. You just can’t believe it’s real. I still don’t. It’s like it’s ripped from TV. Someone bombed the Marathon finish line? No. That’s not a real thing. But it is. And it’s more tragic than I think will ever fully be understood. My thoughts and prayers will be with the victims and victims’ families. Boston and the Marathon will rebuild. I hope those whose lives were forever altered will find some peace. I still don’t know what I’ll do with the pictures on my phone. But I will share one. This day ended so tragically. And so differently than it should have. And though it did, Boston still stands. As I was driving home, I looked over and saw this. I’m sorry it’s blurry, I was driving. Here it is. A city that stands stronger and brighter despite this horrible event. 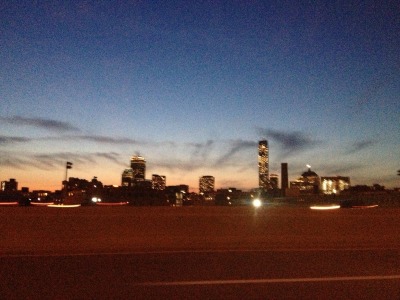 1 thought on “There are so many words. And yet, there are no words.”