Look! A new home. I’ll get into why the move another time. For now, here’s my Half Marathon race recap. Half. Marathon! What?!

I. Am. A. Half. Marathoner! And it feels a little gangsta.

Most runners will tell you that during a race they think it’s the worst thing ever. And then 30 seconds, 10 minutes, or 2 hours after the finish they are already set to sign up for their next race. For me, with this distance, this feeling took three days to set in.

Let’s start at the beginning. Saturday night Jennie’s sister and bro-in-law had us over for a spaghetti dinner, keeping the Sox game on in the background (priorities, people). Dinner was great, company was excellent, and they were totally on board with my plan to just not think about the race in any way, shape, or form. Except to talk about what time to meet and where Molly and Andy would try to spectate.

Sunday dawned dark and rainy. And though I don’t want to ever run in hours of pouring, gushing rain, I’d rather it be a gray sort of rainy day than warm and sunny. Driving to and from dinner Saturday night and driving to the race on Sunday took me over a lot of the roads I’ve been training on and it gave me a little boost.

Once in Harwich I hit up the porta potty and then headed into the gym for registration. I saw Jennie on the way in and dropped my stuff with her to go grab my bib. On the way back over Shanna came running up to say hi. Shanna and Jennie are my two biggest fellow runner supporters so it was particularly special to have them both there. We hung around for a bit, hit up the porta potty again, stretched, and then headed to the starting area. For some reason I thought this was a huge race. Instead it was only about 700 people. I was sort of panicing when Shanna gave me some advice. Run your own race. I was already in that general mental state but to hear someone say it out loud solidified my plan.

Jennie decided to run with me for my first interval but I needed to run slower if I was going to make it 13.1 miles so I sent her on her way. And began my own race. I knew I’d be slow. I knew I’d finish near the end of the pack. I thought for the first time, I might actually be last. But then I told myself to stop thinking about it. I was already 18 minutes into the race. Which meant I had at least run 1 mile. In an effort to not freak myself out, I covered the distance part of my watch with some bacon tape courtesy of Andy/Jennie

A couple miles in, I knew I was in trouble. I had fueled correctly, but I had eaten it too close to race time. My stomach was too full. I didn’t have an upset stomach, but I could tell my body was working on digestion and not blood flow to my legs.

The race claims to be “rolling hills”. Rolling hills, my right foot. All we did was run uphill. It was a loop course. Elevation gain has to be zero. I still don’t believe my garmin elevation profile that says we ran down hill at mile 6.

All those hills were killing my spirit. And my legs. At mile 4 I tried to convince myself I had done a 9 mile training run. But that run was awful, so I was banking on mile marker 5. Because my 8 mile run had felt great. A little after mile 4, the woman that was behind me passed me. I was pretty sure there were only two people behind her. I was a little bummed she caught up, but I kept thinking “run your own race”. A few minutes later I saw her taking a gu out of her pack. So I ran up a little closer and opened my first Gu as well. We chatted for a minute and then she had a rock in her shoe so she stopped and I kept going. I figure she’d eventually pass me again, but I only got one more brief glance of her behind me until we were on the other side of the finish line. At mile 6 I started to think “One more mile and you’ll me more than halfway” but my race was getting ugly. Fast.My legs and hips hurt. I didn’t feel like I could catch my breath. And there wasn’t another person on the course. The volunteers were still out and were so very kind. Their clapping and smiles were a welcome sight and sound. But even those started to dwindle. I don’t remember much of mile 7. I do remember being stoked for mile 8. Mile 8 meant only 5.1 to go. 5.1 is not much. I’ve run 5+miles at least 7 or 8 times. 5 miles is not a scary distance. And just around the corner from mile 8 would be mile 9. And at mile 9 would be only 4.1 left. Which is only one mile more than a 5k. Mile 10 was the worst. I hit a wall and could not break through. My legs and hips hurt so bad when I ran but not when I walked, everything was cramping, the trucks were cleaning up the cones so now I was out on a road by myself and I was passed by the two people that had stayed far behind me for a long time. And one of them was a dude in cargo shorts and barefoot. I told myself to block it out and just run my own race. His wife then offered me a granola bar. At that point I knew I needed salt. All I had was Gu. And the words granola bar make me only think about chewy sweet quaker granola bars so I said no. And then I thought “maybe they’d have something salty” so I asked. They had one of those nature valley crunch bars and though I’ve been warned to not try something new during a race, I was desperate. Everything was cramping. I didn’t feel like I had any water in me. I ate half and was so grateful to this couple as they pulled further and further away. I passed a porta potty during mile 10 and decided that was the last thing I needed. 5 minutes later I had to pee so bad I thought I’d collapse. So I found some woods, waiting for the motorcycle cop that kept going by to go by again, and answered nature’s call. Classy.

I knew there was a big hill at mile 11. And I was hurting. I made a deal. I could walk the rest of mile 10 if after the mile 11 hill I got back to the 5:1 intervals I had used most of the day and most of training. And that’s exactly what I did. I had 2.1 left. Jennie told me once I hit the bike path I was home free. I gave in and pulled off the bacon tape. I was watching mile 11 move along. At the start of the bike path the volunteer there gave me directions for the end and said “it’s a couple miles down”. I was already at 11.6 and thought “it better not be 2 miles more!” I knew he was estimating and just took him at that. On the bike path, I was in the middle of the woods. I couldn’t keep up with 5:1 so I bumped it to 3:1. I put my head down and kept going. At the 12 mile mark and gave myself a pep talk. I was 1 mile. 5,286 feet. Approximately 2500 steps. I had started this in training. Counting my steps. It kept my mind off the pain and made the end that much more manageable. I queued up the amped up part of my playlist and just kept moving. Coming out of the bike path with 0.5 left Money for Nothing came on and as I was getting into the mindset of finishing strong, Andy came and met me. I was pretty sure it was him and as I got closer it was. He turned and started running with me. He told me where to turn and where the finish was. I walked for 1 more minute thinking I was going to have another third of a mile when I turned the corner. When we did and I realized how close it was, I guess I could have kept running. But I knew to start running before I turned. And there, down a tiny hill, at the turn for the finish were my friends. I guess my bright yellow shirt was helpful in finding me in the crowd, or up a quarter mile hill. Because they went crazy. The people on the course walking back to their cars clapped, they tossed out encouragement, and gave me smiles. I hit the corner for the finish and gave it everything I had left. Jennie has a shaky video of it. I just kept going, eyes half closed. At the finish the volunteers were breaking down the fencing. But one asked my name and they announced it just like all the other finishers.

In the gym was a little left over food and no one else. The finishers medals were missing but the two that had finished before me were on a hunt and finally found them. Shanna took it and put it around my neck for me. It was really nice to be surrounded by friends. And then I told them what I had thought for most of the race and what ended up being my facebook status. “what do you call the guy who graduates last from medical school? Doctor. What do you call the girl who finishes second to last at the race? Half marathoner”.

We then went to Friendly’s and I dove into salty greasy goodness. I took a picture, but no one needs to see that. Krystal couldn’t be at the race because of prior commitments, but she called me during my drive home and let me relive the whole race. Because that’s what best friends are for. Also for sending me some truly hilarious encouragement during the race. (thank you smart phone and several friends with text message jokes/cheers).

Finally at home, I showered, adviled, foam rolled, and then did legs up the wall with ice down my pants (on my hips). Hotness. 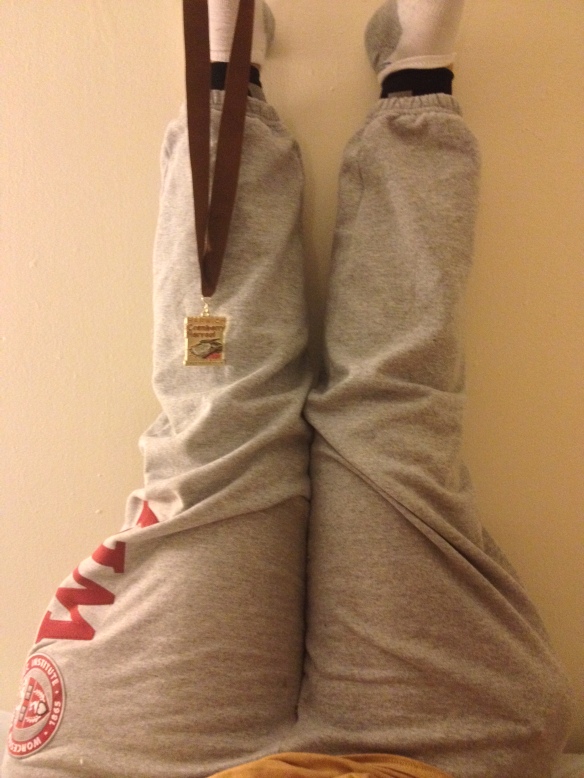 I woke up the next morning and was a little sad about how slow I was, how long my final time was. But it’s what it is. I know I can do better, and I will. On Wednesday I decided to go and look at my runkeeper file again. And it was sort of awesome to see all those mile markers. I really did run 13.1 miles.

I know that I hurt my back and was sideline for more than a month. I’ve gained a lot of weight in the last 6 months. And I didn’t train as hard as should have because I was busy with other stuff and didn’t give it the right priority. Still. At the end of Sunday I had a new medal and a new PR. Turns out Jennie and Shanna PR’d too! A fact I didn’t find out about until at home. I wish I had asked more about their races but I was pretty out of it and just wanted to be done the day.

I want to work on my fitness, me health, and my running and come back to this distance stronger and faster. It’ll happen again. And I would be shocked if it didn’t happen again in the next 10-12 months.

Hearts and half marathons PRs!

Finished, fed, and quite smelly.