Skip to primary content
Anyone who is past the first week of Weight Watchers that claims to not have enough points and still be hungry is crazy (I say this while I still have days like this. So really I shouldn’t judge.) My plate is heaping with a delicious meal. Except really it just looks like it. I’ve got a 1/2 cup rice, 3oz of chicken breast cooked in oil, chilli powder, salt and pepper, and a little chicken broth, and a huge pile of red pepper and Brussels sprouts. I wish I’d known about Brussels sprouts forever. I’m in love with them. Even though I overcooked them a bit tonight. SO if you’re hungry after dinner, consider adding a nice bright green veg. I must remind myself of this next Tuesday when I’m starving and have used all my points and want to just eat all the things. 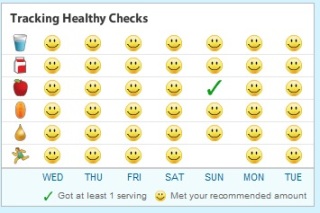 I’m 14 days into 167-days-of-following-Weight-Watchers-until-the-first-day-of-summer or whatever I’m calling it. The second 7 days did not go as well as the first. But I’m still here. I’m still tracking. I’m still running. I’m still lifting weights. I just drank too much on Friday and ate too much chocolate last week (seriously, how can there still be Christmas candy in the office????) I also missed two smileys this week. Sad faces all around. But I kept myself honest and didn’t try to count the trips from the car into the three places I went to count as exercise (I was tempted. I won’t lie)
I’ll be up at WI tomorrow morning. But dang it if I won’t be back down next week. And I got a 5k in last night. And a FULL 60 SECOND PLANK in tonight. So I’m feeling gangsta! (except, not really. I’m whiter than white. And way too terrified of confrontation to ever be gangsta. Buy Ima let myself be a planking, 5king gangsta.) According to Nicole I had a Nicki Minaj moment. But there was this really cute guy next to me in the fitness center and I didn’t want to yell out Nicki Minaj! and have him to think I was weird (even though I was dancing a little to my music. And other than the fact that I was intentionally pushing my body to the point that I was violently shaking and thought I was going to die right then and there). Anywho. I’m felling good. Dinner was tasty. But now I must do dishes, laundry, and take out the trash. How come no one told 10 year old me that being 25 is nothing like when I played house and it was all dog walking and the perfect job that I never had to go to and meeting cute boys. It’s just a lot of no fun things. Well. Except running races. And traveling. And office parties. And sometimes there’s meeting cute boys/men.Hearts and Nicki Minaj153 days til summer snow be damned!!!!!!!!