When I woke up this morning I went to work like always. Partway through the morning I found out that the Wake for a friend’s grandfather was this afternoon. In a town about an hour west of civilization (also known as 10 minutes west of the second largest city in MA. But it’s far from my office/apt/parents/Boston so I sometimes think of it as the middle of nowhere). Of course I was going. Though I would have to leave work early because I could only make the beginning of the wake. And I was in jeans and some random shirt. I ran home at lunch and changed. About 400 times because I didn’t like any options. Back at the office, I went to tell my boss I was leaving early and she wasn’t at her desk. I looked in the parking lot. No car. She had sounded terribly sick yesterday afternoon so apparently she took a sick day. But didn’t tell anyone. Awesome. Instead I told my cube neighbor I was leaving and I would have my phone on and I headed out west. I’m glad I could be there, though there was never really any question of whether not I would make it. I had to leave by 5 to get all the way up to southern NH to help my step-dad, J, shop for my mother’s birthday present. I got there just in time. We were to meet at 6:30 in the Best Buy. 6:30 came and went. Then 6:40. Then 6:50. I didn’t mind. I was browsing the bargain CD bin (remember CDs???) At 6:50 my phone rang. I assumed it would be him. It was my mother. She had good news and bad news about my grandmother’s recovery from surgery last week. The good news was excellent. The bad news requires me to sleep at Grammy’s house tomorrow night. No big. Especially because I’m taking a long weekend and have Thursday and Friday off. (I didn’t have yesterday off, but that’s because my company voted for four floating holidays instead of the extra Monday holidays which equals a 4 day weekend for me. So much better in my opinion) I bought a couch last week and it’s coming while I’m on my mini vacation. And then I’m going to paint and get a head start on spring cleaning. It was supposed to be in preparation of having my family over for dinner to celebrate my mother’s birthday. Except because of Grammy’s surgery we moved it to my mother’s house to make the trip easier on my Grammy. Well. Now my Mom was telling me we were maybe going to cancel it. Um. No. I was raised to believe birthdays are important. Your birthday is your day. You get to pick what Mom makes for dinner. 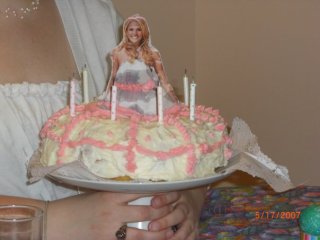